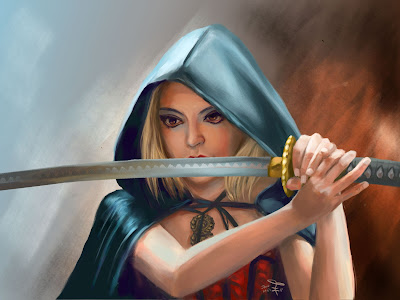 One of several images that I am working on.

Painted in Infinite Painter on a Samsung Tab S3 during my Caltrain commute.

My two favorite apps is Infinite Painter and Clover Paint.....painting is also great therapy once emotions are calm....


Posted by artistebot at 9:43 AM No comments:

The Basics of Infinite Painter by John Hayes

My first tutorial video series is now available on mobileart.how. Please check it out. 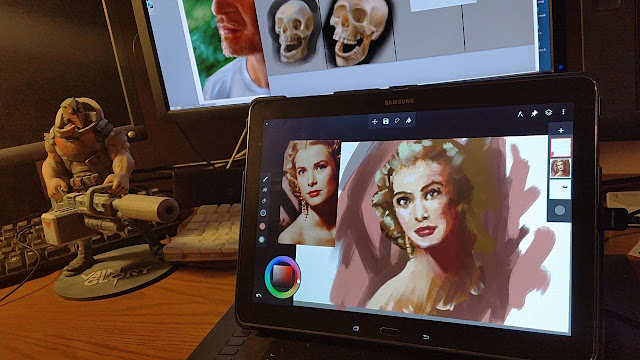 Posted by artistebot at 3:26 PM No comments:

Getting back into painting since last year. Painted during my train commute.

Painted in Infinite Painter on a Samsung Tab S3. 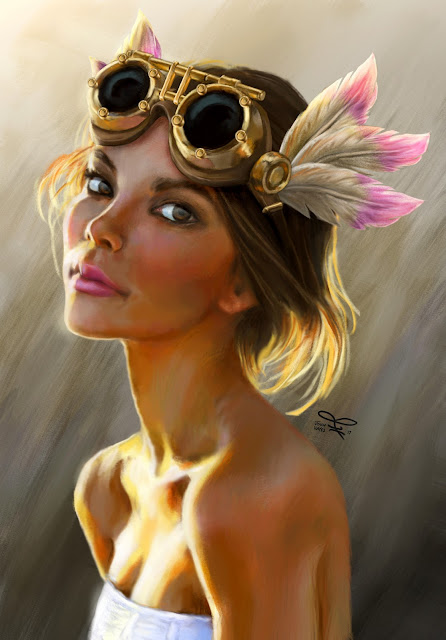 Apps and resources for art creation on Android devices.

There seems to be very little information on good Android or Wacom Companion Hybrid art apps and usage, from the perspective of artist actually using the apps frequently. I am posting here some of my observations and experiences.

Application functions can be assigned to hardware volume rocker, CCH express keys and stylus pen buttons.
There are several Android Apps well suited to Android devices with built-in pen technology, as they provide options within each application, to assign in-app functions such as tool swap, eraser, brush size, color sampler, and so on to hardware keys, stylus buttons, and/or Wacom CCH express buttons.  NOTE while this is possible in Windows, the iPad Pro does not support this type of customization, and the Apple Pencil simply lacks buttons.

Clover Paint  This app seems to have more customization functions than even Photoshop. , with almost limitless brush creation options.

Many of the in-app functions are already tied to key-board shortcut keys, so users of a keyboard or perhaps a Samsung Chromebook Pro may have an added benefit.

In addition to simple hardware binding, the tools and brushes can also be configured to a stylus button and/or hardware keys to have a different in app functions depending upon the state of the stylus off screen or in contact with the screen. IMHO, this feature is innovative and totally unique.

Infinite Painter  Lots of great tools comparable to what is included in Photoshop. Really cool layer and image filters, and has good distortion tools including a "Photoshop-like" liquify tool.

TVpaint Animation 11 Full pro application that is the same as the Desktop version. Amazing assortment of special brushes, not to mention professional level animation capability. Originally bundled in Europe with the CCH, this app is FREE to download and use, no in-app purchases required!

Applications that recognize the S Pen/Wacom stylus tilt function
The Wacom CCH, Samsung Note 4, 5, 7, 8, Tab A 2016 10.1 w S Pen, and Tab S3 have Wacom EMR technology with 4096 Levels of Pressure, and Pen orientation detection. These are apps that I have used, there may be other apps that recognize tilt that I am not aware of.

Clover Paint Can be set to affect different parameters, such as orientation, size, shape, and opacity. The same or similar settings should work on any brush. Clover Paint uses small PNG to import brush settings. I have posted a brush image file with tilt parameters active.


To import the brush into Clover Paint, do the following steps within an open document:

#1 Tools-File: Opens access to file options.
#2 File-Import-Image: Place image in empty layer
#3 Select any Brush- Brush Imp; the "clover" should show up in the middle of your screen

Infinite Painter The Beta version has had tilt implemented from time to time.


There is a bit of a misconception that Android is lacking of capable or "Pro" level art applications, here is a list of fully featured 2D art apps that work well with a stylus enabled Android device:

There are many more painting apps than these, but these are the ones I have used on my devices. There is also a fully featured 3D modeling app called:

For "Photoshop-like" image editing I prefer PhotoSuite Pro 4 or Photoshop Touch There is a port of GIMP is also available on Android:

Android is capable of multitasking.
Combined with a large format screen, the latest version of Android has built-in windowed support, for older versions there are several windowed apps the provide a good multi-task work flow experience. There are several multi-window, floating, and multitasking apps on the Google Play store, most of which are browsers and video players. For simple image reference when I paint, I recommend in order usefulness.
Popup Gallery

This is a feature the Samsung custom Android OS for Notes and Tab really stand out and add to their value.

On Samsung devices, WM-Pen enables floating/pen-window/multitask ability for almost any app installed on the device. Highly recommended. No Root Required!

This excellent gallery app includes several built-in image editing tools, including image flip, filters etc. I use MW-PEN App Enabler to convert Gallery KK into a floating /window app on my Samsung device so I can use the app for reference, and be able to flip the image in-window when I flip my painting.

I use MW-PEN App Enabler to convert QuickPic into a floating /window app on my Samsung device so I can use the app for slide-show reference. Really valuable for doing quick figure drawing gestures and practice.

Many Android devices, such as Sumsung, come pre-installed with tons of bloatware, that can hog system resources, and slow down system performance. I like to use EZ Disabler Pro on my Samsung Devices to help maximize device performance when painting plus disable the S Pen "screen shot" when the pen button is pressed. No root required.
EZ Disabler Pro

A few tips on Clover Paint
Clover Paint it really well suited for use by artists who are used to having easy access to shortcuts via custom interface and/or hardware buttons. Its interface is not very user friendly at first, but is highly customizable and can be configured to have a almost any work flow desired.

The developer is Japanese, but an english user guide can be found here:
Clover Paint User Guide

A few video tutorials can be found here:
Video Tutorials by Gavin Ball

The developer (Inoue Takashi) can read English and is very responsive to bugs or feature requests.
Here is a screen shot of how I was able to set-up Clover Paint for my needs, I am constantly creating new brushes for it, so hopefully I can share them in the future. 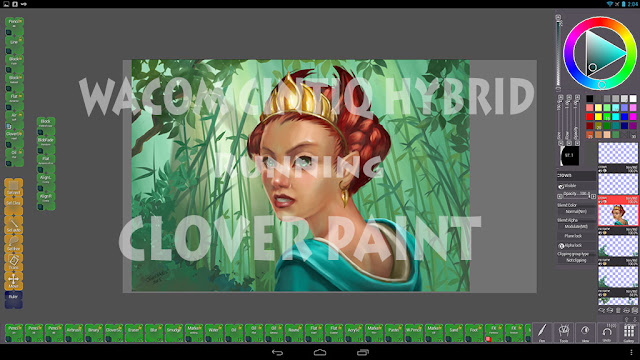 I hope this can help out anyone who wishes to get more out of their Android Device or Wacom Companion Hybrid. Sadly support for the CCH seems to have ended, however there is a few on-line resources for CCH support here: